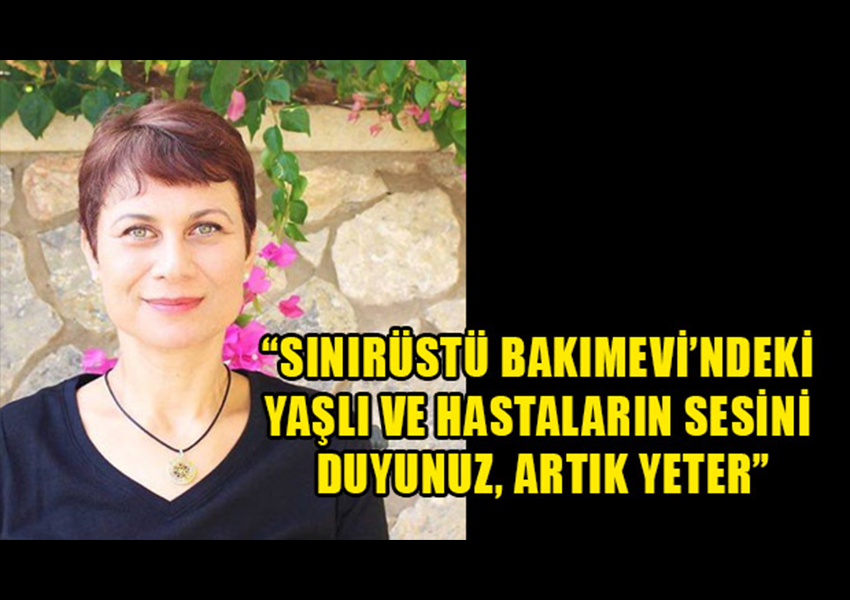 The Chairperson of the Association for Elderly Rights and Mental Health, Prof. Hatice Jenkins, said in a press statement – entitled “Hear the voices of the elderly and patients at Sınırüstü Nursing Home, enough is enough” – that she felt the need to make a statement to the press following days of complaints received from both the elderly and their relatives.

The most striking of the complaints received was that the elderly were left alone from 5 pm until 8 am the next day, that there was no one who put them to bed, meet their basic needs, and give their medicines. Prof. Jenkins stated that this situation is unacceptable.
The statement said that the Association has been informed that the nursing home manager has been unreachable for a week. Prof. Jenkins said, “We invite the relevant government institutions and officials to duty so that this situation, which tramples on human rights in our country, does not continue, and our vulnerable elderly people are not abused.”

Jenkins reminded that it was stated in the reports written two months ago by the Social Services Department that this nursing home, which belongs to a private foundation and has had years of management problems, has both an unhealthy building on the brink of collapse, and that it is staffed with insufficient personnel.
“Writing a report and documenting these situations is, of course, important, but it is insufficient on its own, ” said Prof. Jenkins, noting that they wanted to know what measures were taken to protect the elders against abuse.
She added that nothing has changed even after two months and that no attempt has been made to seriously improve the Sınırüstü Nursing Home, or to close it if it will not be improved.
“The audit and the written report have become a confirmation document to continue the existing disaster, the elderly there are forgotten,” she said.

Jenkins gave the following information:
“Fifteen years ago, the Sınırüstü Nursing Home, which was built on a 4-acre state-owned land by the Turkish Aid Committee, was donated to the People’s Foundation, a private foundation. This building, which was built as the first nursing home building in the TRNC, has come to its current stage of deterioration within 15 years due to neglect, lack of inspection and indifference. Every institution and organization that is implemented on incorrect legal foundations keeps everyone busy in the society, makes them fight, and does no good to anyone. There are many examples of these in our country, one of them is the Sınırüstü  Nursing Home…

“The state, the Cyprus Evkaf Foundation, and the Turkish Embassy, ​​which established the Sınırüstü Nursing Home, but the future of this institution in jeopardy from the very beginning by transferring this investment, which is a great need in the society, to a private foundation that was not formed on a sustainable legal basis, which could not be institutionalized, did not have a board of directors and was far from any transparency and accountability.

“While the Sınırüstü Nursing Home, which has been managed as a family business for 15 years and is on its last legs, waiting to be rescued, state officials and the Cyprus Evkaf Foundation are resisting to take the responsibility of the nursing home, to which they have turned a blind eye for so many years. Unfortunately, the innocent vulnerable elderly and the sick in need of protection, suffer as a result.
We cannot accept this, we invite the İskele Municipality, the Social Welfare Department, the Ministry of Health, and the Evkaf Foundation to fulfill their duties and take care of our elderly people.”