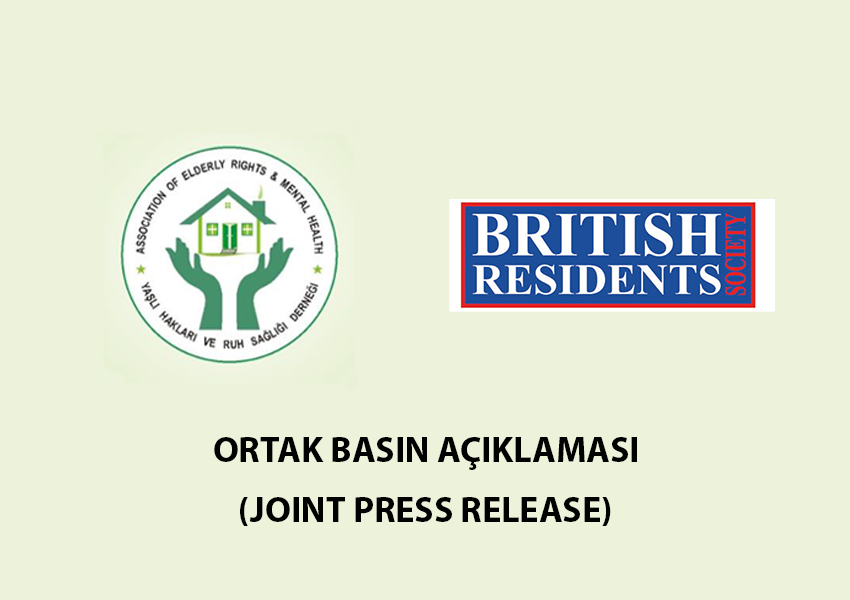 The Association of Elderly Rights and Mental Health has been working since 2018 to raise awareness of the suffering of the elderly community in the TRNC, and to contribute to improving their quality of life. It is not only the Turkish Cypriot elderly that is suffering due to a lack of regulatory law and social policy for elders. The foreign elderly community are also feeling the detrimental effects of not having access to quality elderly health care. Language barriers mean they are often suffering in silence. Many who become widowed suddenly find themselves in a vulnerable position, while others find themselves abandoning their dream of living the last years of their lives here because of not being able to find the care they need. Since December 2021, the Association of Elderly Rights and Mental Health has been liaising with the British Residents Society (BRS), which represents 2,500 expats, in order to understand the issues of the expat elderly community, and plans to reach out to other foreign community groups. The Association has learned that many elderly foreign residents have no other option than to employ home carers illegally in what has become an unregulated black market. We have also learned that some vulnerable elderly have been turned away from care facilities because they do not speak Turkish. Thus, they face huge private hospital fees for staying in long–term care. BRS Social Welfare Officer Julian Mawdesley shares vital information about the issues and needs of the foreign elderly community in the TRNC. “The TRNC has become a diverse country made up of not only Turkish Cypriots, but also a number of other nationalities who have made this beautiful part of the world their home,” said Mr Mawdesley. “It is currently estimated that there are between 14,000 and 16,000 British expats living in the TRNC. Apart from students, temporary workers and visitors, the majority of non–Cypriots living here are retired non–workers who have chosen to live their remaining days in this climate. “The current life expectancy for those living in Europe is 78.2 years which means expats living here expect to spend many years in the sunshine. It is noticeable numbers of expats returning to their country of birth towards the end of their life or for medical treatment is reducing, as they wish to spend their last days in the TRNC, and are happy using the treatment available here. “This then highlights the issue of home care, residential care and end of life care. It would be normal to expect that a family member who is ill or vulnerable would be looked after by their family, however, many expats living here do not have that comfort and therefore seek alternative support. “As people age, they generally suffer from ageing and mobility problems and require some form of assistance, either through medical aids or professional support. Although in the TRNC, medical aids
are easily available, professional home care has been an issue. Expats have had to rely on unregulated,

“Some seeking more long–term support, such as live–in care or a placement in a care home, have been told that this is not possible due to the language barrier and cultural differences. It has to be said that the standard of care homes in the TRNC is lacking EU standards and appears to be a last resort. “In the EU, community care services are intended to help people who need care and support to live with dignity and independence in their community, and to avoid social isolation. These services are aimed at the elderly and those with mental illnesses, learning disabilities and physical disabilities.” Recalling the 1991 United Nations Principles for Older Persons of ‘independence’, ‘participation’, ‘care’, ‘self–fulfilment’, and ‘dignity’, the Association of Elderly Rights and Mental Health together with the British Residents Society call for the following: