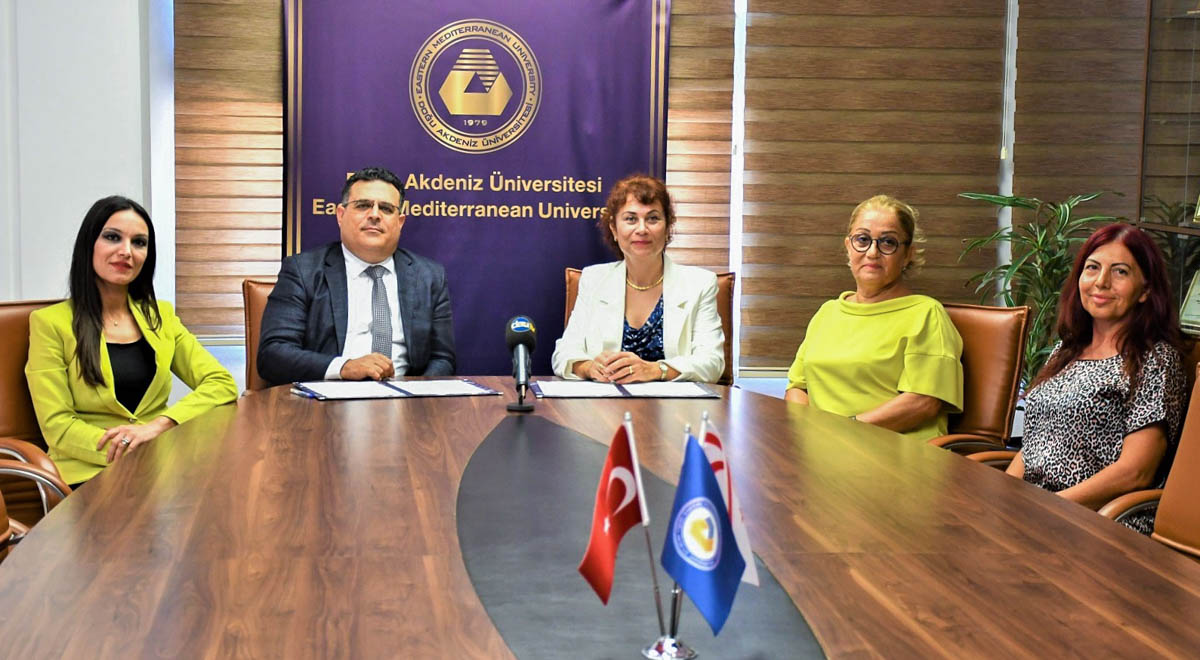 A cooperation protocol has been signed between the Eastern Mediterranean University (EMU) and the Elderly Rights and Mental Health Association in the cultural, social, education and research fields for the benefit of society. The signing ceremony of the said protocol took place on Tuesday, 6 September, 2022, at 11:00 am at EMU Rector Prof. Dr. Aykut Hocanın’s office. Present at the ceremony were Vice Rector for Social and Cultural Affairs Prof. Dr. Deniz İşçioğlu, Faculty of Business and Economics, Department of Banking and Finance academic staff member and Executive Board President of the Elderly Rights and Mental Health Association Prof. Dr. Hatice Jenkins, Vice President Semra Erel, Member of the Executive Board and General Secretary Senal Amca. EMU Rector Prof. Dr. Hocanın and the President of the Executive Board Prof. Dr. Jenkins signed the said protocol.

Speaking at the ceremony, EMU Rector Prof. Dr. Aykut Hocanın stated that as a state university, EMU continues to fulfill its responsibilities regarding quality education and research, as well as serving the community and that this cooperation protocol is a part of this responsibility. Stating that EMU wants to contribute to the efforts of the elderly in their integration to society, Prof. Dr. Hocanın stated that these issues are dealt with in a scientific framework in the world and that EMU will contribute its best with its academicians and staff who possess expertise in this field.

Scientific Studies to Be Conducted

Elderly Rights and Mental Health Association Executive Board President Prof. Dr. Hatice Jenkins also stated in her speech that they are extremely honored to cooperate with EMU, the most respected and well-established university of the TRNC. Stating that she has been working as a faculty member in EMU since 2000 and served as the Vice Chair and Chair of the Department, also focusing on issues related to the elderly, Prof. Dr. Jenkins stated that this is due to the fact that the rights of the elderly are not talked about much in the TRNC and the visibility of the elderly is low. Stating that despite the rapid aging of the society, very little scientific work has been carried out on this subject and the needs and policies have not been determined. Dr. Jenkins stated that as an association, they will continue serve in this field with the scientific contributions of EMU.